Happy Holidays from the Helfrich Family

News Article: 100 Years of Helfrich’s on the McKenzie River 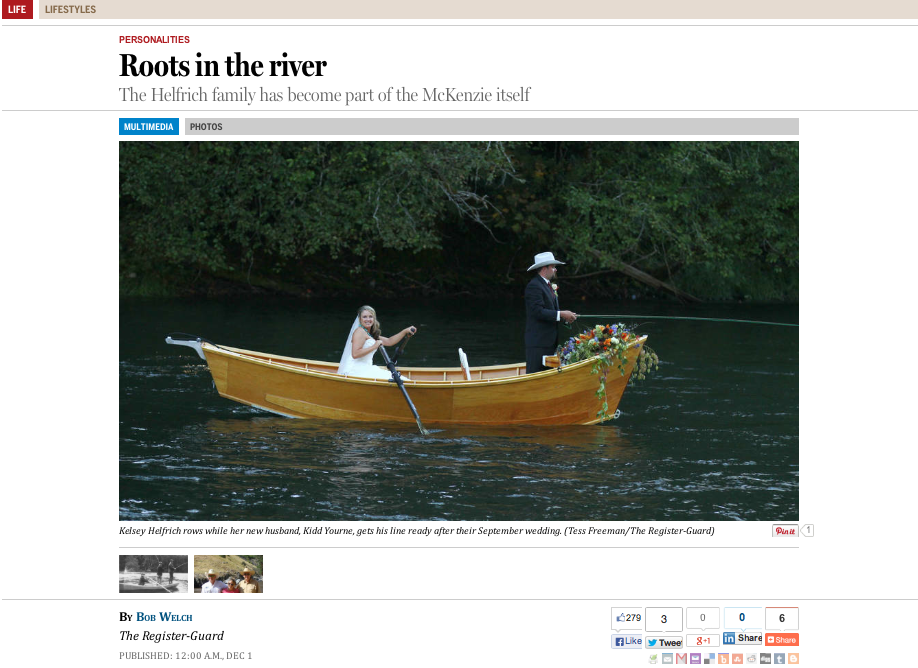 Eventually, all things merge into one, and a river runs through it.

VIDA — Last August, when Kelsey Helfrich married a fellow river guide at Eagle Rock Lodge, the scene was more than a wedding.

Based on the wishes of the 28-year-old bride, it was a tribute to the tumbling, twisting thread of water that has drawn together a family that Kelsey and her cousins are now the fifth generation to dip its oars in: the McKenzie, which drains a forested watershed rising to the 10,358-foot South Sister.

It was a tribute to the wooden drift boat, which has been a Helfrich hallmark since Prince and boat designer/builder Veltie the “Preacher” Pruitt — a Eugene Bible School grad — became the first to run a handful of rugged Northwest rivers, including, in 1931, the upper Rogue.

But, mostly, it was a tribute to a family — her family — on the cusp of celebrating its 100th anniversary of living, working and playing on the McKenzie. The lead boat in her whitewater processional belonged to her great-grandfather, Prince Helfrich, who, at 25, guided President Herbert Hoover down the river in 1932. For this two-mile float to the altar, the boat was adeptly rowed by Prince’s now-81-year-old son, Dave, “by far the best boatman I know,” Kelsey says of her grandfather.

Make no mistake; as attested by the wedding-reception electric guitars that wailed on that summer night, this wasn’t 1914 anymore, the year Ben Helfrich settled his family along the river. But it was a reminder that if the riffles of time inevitably carve changes as they tumble forward, the deeper things endure.

Family. Wooden boats. And, of course, the river.

“The Helfrich Family is so woven into the fabric and the culture of the McKenzie River, it’s hard to think of one and not think of the other,” says Greg Hatten, who runs Wooden Boat Adventures guide service and has won the McKenzie Two Fly fishing tournament. “They not only pioneered guiding on the river, they set the standard for how to treat guests and how to create authentic outdoor experiences in our classic wooden drift boats. We all look up to them.”

The Helfriches are to the McKenzie Valley what the Cartwright Family of “Bonanza” fame were to The Ponderosa: a multigenerational collection of testosterone — and Kelsey — that handles boats with the skill in which Hoss and Little Joe handled horses.

Counting spouses, children and in-laws, the Helfrich family now exceeds 50 people, of whom 14 are licensed river guides in Oregon and most also in Idaho. Five Helfrich families still live along the Mc­Kenzie River.

Kelsey is not only the family’s first female guide, but the first female drift boat guide on the Rogue River and on the Middle Fork of Idaho’s Salmon River.

Says Kelsey: “Anytime I get in a situation and feel nervous — some rapid with big technical challenges — I just think: Prince ran this, my grandfather (Dave) ran this, my dad (Ken) ran this.

“People tell me my boating style is similar to Prince’s. He wasn’t a big guy, and he relied on finesse. His skill was in the way he read the waters, the way he knew exactly what he needed to do to make the boat go where it needed to go.”

It was love at first sight. Not for Kelsey and her new husband, Kidd Youren — well, OK, maybe for Kidd — but for Ben Helfrich and the McKenzie River. He fell for the river in the spring of 1914.

Having recently moved his family from Prineville to McArthur, Calif., to raise wheat, Ben was visiting friends in Springfield when he was invited to the Mc­Kenzie home of the Rusts, between Vida and Blue River.

Ben Helfrich was so enchanted with the Mc­Kenzie that, within days, he’d bought 160 acres of land for $5,000 and soon moved his family from California. Today, you’ll recognize the Highway 126 portion of that land as the stretch near the old Mom’s Pies and Heaven’s Gate; Ben built those birdhouse-like cabins perched between the highway and the river.

He called it Halfway Camp.

The family — Ben’s wife, Ruth, and three children — scratched out a living by raising hogs and chickens, tending a huge vegetable garden and shooting deer. They ran a hotel, trapped game, pumped gas — Ben had the first 1914 Ford in the McKenzie Valley — and, of course, guided fishermen down the river.

By age 10, Ben’s son, Prince, was camping out alone for days on end. And in his 20s he and “Preacher” Veltie were building and testing lighter, board-and-batten boats and running regional rapids that nobody else had dared attempt.

“Articles about him have proclaimed him the ‘last of the mountain men,’ ” wrote Ken Metzler in a 1966 edition of Old Oregon magazine, “a man born 100 years too late, a man in league with the likes of Joe Meek, Kit Carson and Jedediah Smith.”

By then, Prince had married Marjorie Peyton, a young woman from Klamath Falls whom he’d met during his brief foray into civilization: school at the University of Oregon, funded by that odd combination of trapping and moonshine, the latter which was popular with the boys at the UO.

After the 1931 wedding it was back to the river and the mountains. Beyond helping raise four children, including Dave, Prince built houses for income, founded the Skyline Boys Camp in 1947, wrote a weekly column for the Eugene Register-Guard, “Around the Campfire,” in the early 1960s and led fly-fishing trips on the Mc­Kenzie, the Salmon and other rivers. Estimates put his rivers-run mileage north of 50,000.

By mid-century the Helfrich name was well established in drift boat circles. In the decades to come, Prince’s clients included Walter Haas Jr., chairman of the board of Levi Strauss & Co.; investment mogul Dean Witter; and Oregon Gov. Bob Straub.

“Oregon rivers were just rivers until we met Prince Helfrich,” Straub wrote in 1990. “Running rivers with Prince made them come alive.”

Around the campfire, Prince would pull out his harmonica to deepen the under-the-stars mood, tell stories and gently encourage environmentalism long before it was cool.

“Prince had the most sensitive appreciation of nature and of the environment of anyone I have known,” Straub wrote.

“As wonderful as Prince was, Marjorie deserves a huge amount of credit,” says Sherill Helfrich, who married Ken Helfrich, a grandson of Prince who heads Helfrich River Outfitters. “She raised great sons; she’s been a huge example to me, for sure, and all the Helfrich women. She was an anomaly. She loved to explore with Prince. If she hadn’t have had that spirit of adventure he might not have excelled as he did.”

The couple had four children: Dave, Dick, Diane and Dean.

“You can learn more about history in one fireside experience with Dave Helfrich than most people can gain in reading an entire book on the subject,” says John Brown of Eugene, a longtime Helfrich client.

The stories are told year after year on river trips:

How, when Prince first met Levi Strauss’s Walter Haas Jr., he was the guide wearing another brand of jeans — and, for the next Christmas, received a box full of Levis.

How Prince Helfrich was named for Prince Glaze, son of Till Glaze, the man for whom Black Butte Ranch’s Glaze Meadow is named and who ran the Bucket of Blood Bar in Prineville. He was killed in a gun fight in Burns.

How, along with Veltie Pruitt, Prince had a bit part in the 1940 movie “Abe Lincoln in Illinois” because portions were filmed on the banks of the McKenzie.

And how, in 1989, Aaron Helfrich — a great-grandson of Prince — took President Jimmy Carter and his wife, Rosalynn, down the Rogue River.

“This is a family that works hard and plays hard,” Kelsey Helfrich says. “We expect a lot from each other. At one point on the Middle Fork of the Salmon, we were on the river 53 days in a row. And yet, when it’s over, we reward ourselves.”

Now everything has changed and nothing has changed. The wooden boat is now part of a larger river parade that includes aluminum boats, rubber rafts and kayaks. A $300, weeklong trip on the Salmon River now runs about $3,000 and will include two entrees per night and a fine selection of wines. Marketing a fly-fishing trip goes beyond word of mouth to Twitter and Facebook and Instagram.

If Prince’s wife, Marjorie, had the adventurous spirit to be in the boat with her husband, Kelsey prefers working the oars.

But amid all the changes, the river abides — as do the Helfriches.

Kelsey looks at her grandfather, Dave, and shakes her head. Like his father, Prince, he was guiding long before he was shaving — and, eight decades into his life, still has the hardened handshake of a logger.

“You put him in a boat seat, and he makes it look so effortless,” says Kelsey, who’s had that said about her, too.

“There’ve been a number of Helfrich women who would have been great guides but they were of the wrong generation,” says Sherill Helfrich, Kelsey’s mom. “For Kelsey to break in has not been easy for her. It’s a man’s world.”

Kelsey not only works the oars like her great-grandfather, but with her wedding brought to fruition a dream of the man. Prince hoped to have his and Marjorie’s vows said at the head of Marten Rapids.

“He wanted them to come down in two boats and get married there on that big rock,” Dave Helfrich says.

For whatever reason, the two were married in a church in Springfield. But Kelsey’s wedding was Prince’s dream and more. The wedding party arrived at Eagle Rock in 13 wooden drift boats. And, after the ceremony, the bride and groom used rock-paper-scissors to see who was going to row and who was going to fly-fish as they left on the river.

“I’m very proud of our nearly 100 years on the river,” Kelsey says. “I love floating through that section where Halfway Camp used to be. I’ll always tell the people in my boat about Ben and Ruth first coming to the valley.”

And about how, as long as she’s on the river, she will never use anything but a wooden boat, which tend to be lighter and more maneuverable.

“Oregon rivers were just rivers until we met Prince Helfrich.”

Looking Back Upstream… A Recap of the 2013 Season