The world lost a legend on Oct 7th, 2016, when David Prince Helfrich passed away peacefully at the age of 84. The love of his life, Terry Sambrailo was by his side. Dave was born in Eugene, OR on April 21, 1932 to Prince Elery and Marjorie Peyton Helfrich. The proud parents took their first-born home to live for the rest of his life east of Vida, in the beautiful McKenzie River Valley. Growing up, he attended McKenzie schools and Oregon State University, but he knew very early in life what he wanted to be when he grew up. Dave began his life long career as a fly fishing guide at the young age of 14, advancing on to become an admired outfitter and continuing to guide his fly fishing clients for 70 years until he retired in 2015. He was a master on the oars and looked effortless as he ran the most technical rivers in the Northwest in his “Helfrich green” wooden McKenzie drift boats. He was an outstanding river Outfitter who was a great leader in the outfitting industry. Dave was known for his innovative, deluxe river accommodations for clients on his multi-day trips on many Pacific Northwest rivers.

Far exceeding other boatmen, he drift boated the technical whitewater of the Middle Fork of the Salmon River for 67 years. He established an extensive clientele from around the world who came back time and again, bringing new generations to experience floating these wilderness rivers while “roughing it” with Dave and his experienced crew. A great storyteller, Dave could truly captivate his audience with his way with words and memory for details. A book of his stories is set to be published in the near future.

For many years, Dave, his brother Dick and their father Prince worked together in operating the Skyline Boys and Girls Camps in the Three Sisters Wilderness and on the McKenzie River. At these camps, 12-16 year olds learned an abundance of skills including fly-fishing, knot tying, handling firearms, fire building, and many outdoor skills.

During the 1950’s, in addition to guiding, he logged during the winters with his partner Charlie Spores. Together, they operated Helfrich-Spores Logging Company. Dave was an accomplished horseman, competitive trap shooter, upland bird hunter and elk hunter. He harvested 52 elk in his lifetime. One of his most beloved hunting areas was Cedar Swamp in the Oregon Cascades.

Discovering one of his true passions, Dave became a pilot in 1974 and was an accomplished instrument rated backcountry pilot. He owned four different planes in his lifetime and flew for business and pleasure for many years. He also built the landing strip at Winkle Bar on the Rogue for his friend Wally Haas the owner of Levi Strauss.

Dave had a great passion for life and adventure however he never knew greater happiness until he fell in love with Terry Sambrailo and spent the rest of his life by her side. Dave and Terry went on many adventures and their love and dedication was truly one for the storybooks. Dave was surrounded by so much love in his life. His three kids, Debbie, Kenny, and Kathy, their spouses and his four grandkids, Josh, Lara, Kelsey, and Tyler are joined by Dave’s siblings, Dick, Dean and Diane and the entire extended family in holding him close to their hearts. Dave had so much to teach to those around him; a man who led by example.

Dave leaves behind a huge legacy that will live on through his family and all of the lives that he touched. His love of life, adventurous spirit, impressive abilities and above all, his humble presence should inspire us all. 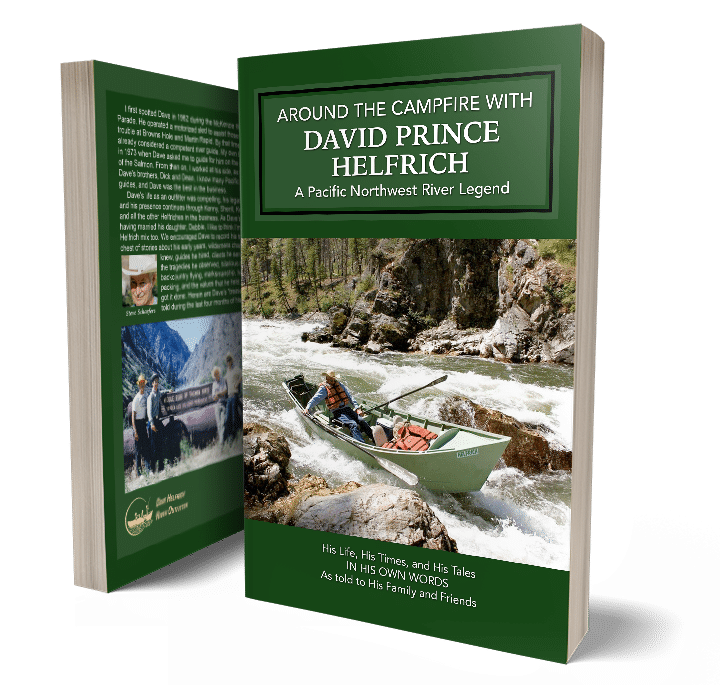 For international orders and questions please contact us at info@davehelfrich.com